““We process questionnaires and surveys annually as part of our regulatory requirements and Informa have worked with us closely over the years providing form designs, capture services and analytical reports that require a lot of thought and understanding” Jim McDermot Head of Operations & Information and Communications Technology, Medical Council of Ireland” 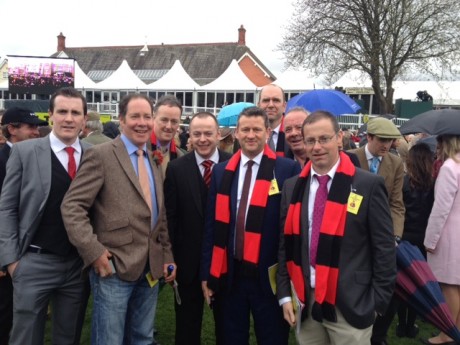 Posted: April 9th 2014
The race did not go the way we planned for LNB and in the National you need everything to go your way. We had a whale of a time as you can see. The horse came out of the race real well and we are still considering running him in the Irish National on Easter Monday!

LNB is in good form, he jumped the National fences down in the Curragh over the weekend with Davy on board and everything went to plan. Now its all about getting him there on the day fit and well. Can't wait as the excitement is getting near boiling point.

Tom Gibey is pleased with the way things are going he will hopefully travel over next Wednesday and we are on the bus from Kilskyre at 8am Thursday morning for three days of racing and all that goes with it!

I was up in the yard with Tom Gibney over the weekend and Lion Na Bearnai is in good order working well and doing everything Tom is expecting of him.

We just got word also that Davy Russell will ride him in Aintree which is fantastic news coming off a super week in Cheltenham.

Lion Na Bearnaí did what was asked of him this weekend in the Bobbyjo coming in fourth behind 'On his Own' one of the new favourites for the Aintree Grand National.

'We were hoping for a big run out of him even though he was all wrong in the weights so maybe a tiny bit dissappointed.

He came out of the race fine, eat up and is injury free which is the main thing. Now we need to focus on getting him to Aintree in the best condition we can.'
Tom Gibney Trainer

Now 12, Lion Na Bearnai has struggled with injuries since his day in the sun but made a good reappearance over hurdles in November. He showed very little over fences at Navan last month and was sent off at 14-1 in the five-runner field but jumped well for Andrew Lynch and outstayed the 6-5 favourite Competitive Edge to score by four lengths. With a win under his belt Gibney is now dreaming of Aintree and the Crabbie's Grand National.

"I said to the lads (Lock Syndicate, owners) beforehand even though they were giving him no chance, if he jumped, he'd be there or thereabouts. That's exactly how it turned out and he loves this place," said Gibney. "It's great to still have him and for him to still be showing that ability. He's felt good all season. We were delighted with his first run over hurdles but he was disappointing last time. He didn't jump well which isn't like him at all. "If he hadn't run well here and was dropped a few pounds we might have thought about coming back here for the Irish National. He's in at Aintree and hopefully we'll head there."